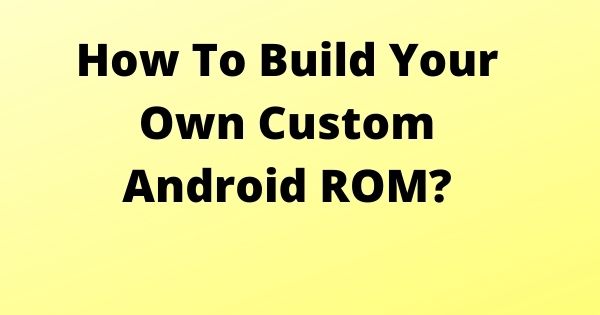 Android is one of the most popular mobile operating systems globally and has been for years. The company behind Android is Google, which offers it free of charge to phone manufacturers and mobile carriers so they can customize it to their liking. This openness of Android is a crucial reason for its popularity among developers and phone manufacturers alike.

Users can modify Android to fit their needs by adding or changing features, and the code is available to programmers and developers. It’s also free of charge, which means that anyone who wants to use Android can do so without paying a licensing fee.

So, if you want to know How to build your own custom Android ROM, then we will tell you how you can start, but do all the things carefully; otherwise, your device OS can be lost.

How To Build Your Own Custom Android ROM?

There are many methods to create a custom Firmware or ROM for your Android device. The easiest way to accomplish this is to use a basic Custom ROM already created for their device and modify it to suit their needs.

If your device doesn’t have any custom ROMs, you can obtain one compatible with the processor.

This is the basic procedure. You can download and build Android from Android Open Source Project. Then, modify the source code for your custom version. It’s that simple!

Check out documentation about building AOSP (BY GOOGLE).

It is essential to read the document, reread it and then go back and reread it. Do not skip steps, assume that you know everything, and skim over sections.

Although I won’t be able to repeat exactly what’s in the instructions, the general steps are:

Establish a build environment, including installing the Java Development Kit and ensuring all paths and directories are correct.

Grab the source – this can be done using the “Repo” tool and git.

Get proprietary binaries: Some drivers can only be released in binary.

Use the “lunch” tool to choose a target.

Start the build by using “make” or Jack.

Flash the build to your device using fast boot and ADB.

Note: Android operating system is complex and includes many subsystems. It took a lot of time to create an operating system as powerful and complex as Android. You will need to start small if you want to customize Android. It will take many hours and dedication to create an alternative Android distribution. That being said, It can be rewarding to create your Android version if you’re comfortable writing code.

This is a quick guide to Build Your Own Custom Android ROM, there are several more things, and code’s that you have to build or take from several other sources to create your own custom ROM successfully.

It is a bit of challenging work to do, it can take a lot of hard work and time to build a custom Android ROM, but if you do the good work by learning all the things first, you can create your Own Custom Android ROM.